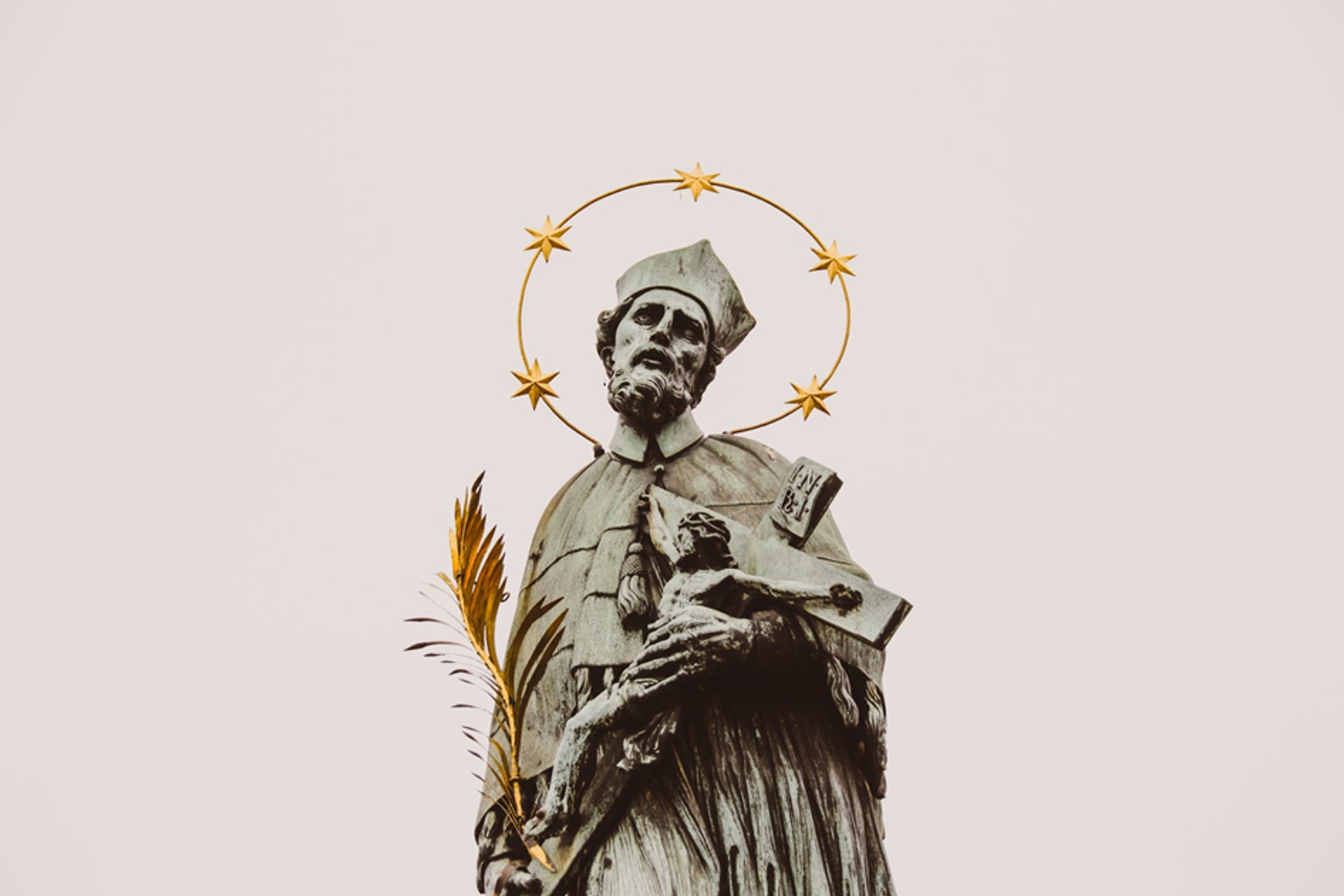 Every day, without even realizing it, people pass the many statues of John of Nepomuk (Jan Nepomucky) all around the Czech Republic. Our project helps kids and parents realize the rich history surrounding them. When people see all the statues on the map, they begin to realize the hidden world right in front of them – which in turn motivates them to observe the world around more and creates a playful opportunity to create discoveries for others.
Libor Peprny, Founder of Peprna Praha

Libor Peprny, the charismatic founder of Peprna Praha, gives residents young and old a window into the history of the Czech Republic with his weekend walks.
Libor’s surname, Peprny, means “peppery” or “spicy” and his “peppery walks” are growing in popularity. More and more families are joining Libor every month, curious to discover the Czech Republic’s secret history – and just where the mysterious five stars of John Nepomuk fit in. 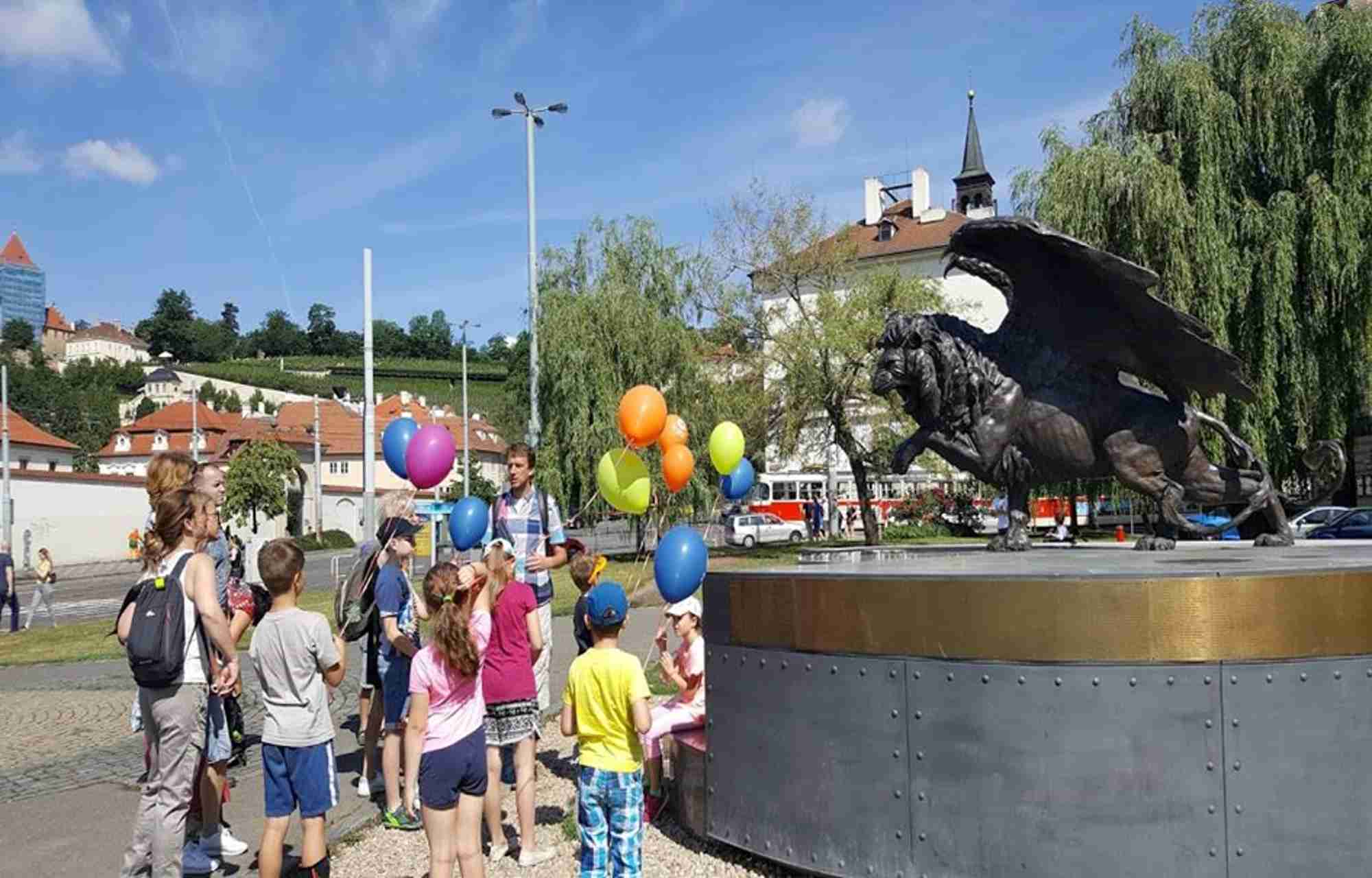 Saint John of Nepomuk (Jan Nepomucky in Czech) (c. 1345 – March 20, 1393) is one of the Czech Republic’s most famous patrons. Nepomuk statues can be found across Central Europe, where the Saint is usually portrayed with a halo of five stars, commemorating five stars that hovered over the Vltava River on the night of his death.

Three years ago, when Libor Peprny began to realize in just how many places Nepomuk’s statue appears, he started adding images of the saint to his Peprna Praha Facebook page – his only platform, at the time, to share his passion for Prague.

‘I created the Peprna Praha Facebook as part of a hobby,’ tells Libor. ‘And soon after, I started posting walks I would host over the weekends on that page. The project grew and before I knew it, I was adding an interesting thing about Prague every Friday, always making it fun for children. Then, every Monday, I started to post an image of one of the many Johns of Nepomuk I had found around Prague over the years, adding interesting information about the statues and their location.’

Libor runs Peprna Praha and is happy that he can share his passion with kids through those weekend walks that he prepares so diligently. The walks last about two hours and uncover hidden treasures of Prague not only to kids but also to many parents.

‘Walks are different every month. I do it mainly for myself and for every walk I prepare or re-learn what I might have forgotten. Every month I pick a different topic, place and goal and present to kids and parents. Even though, the next month there’s something completely different. I like to find connections between places and stories. There’s always something that we discover with kids, and next time they attend, we can refer to what was uncovered the last time.’ 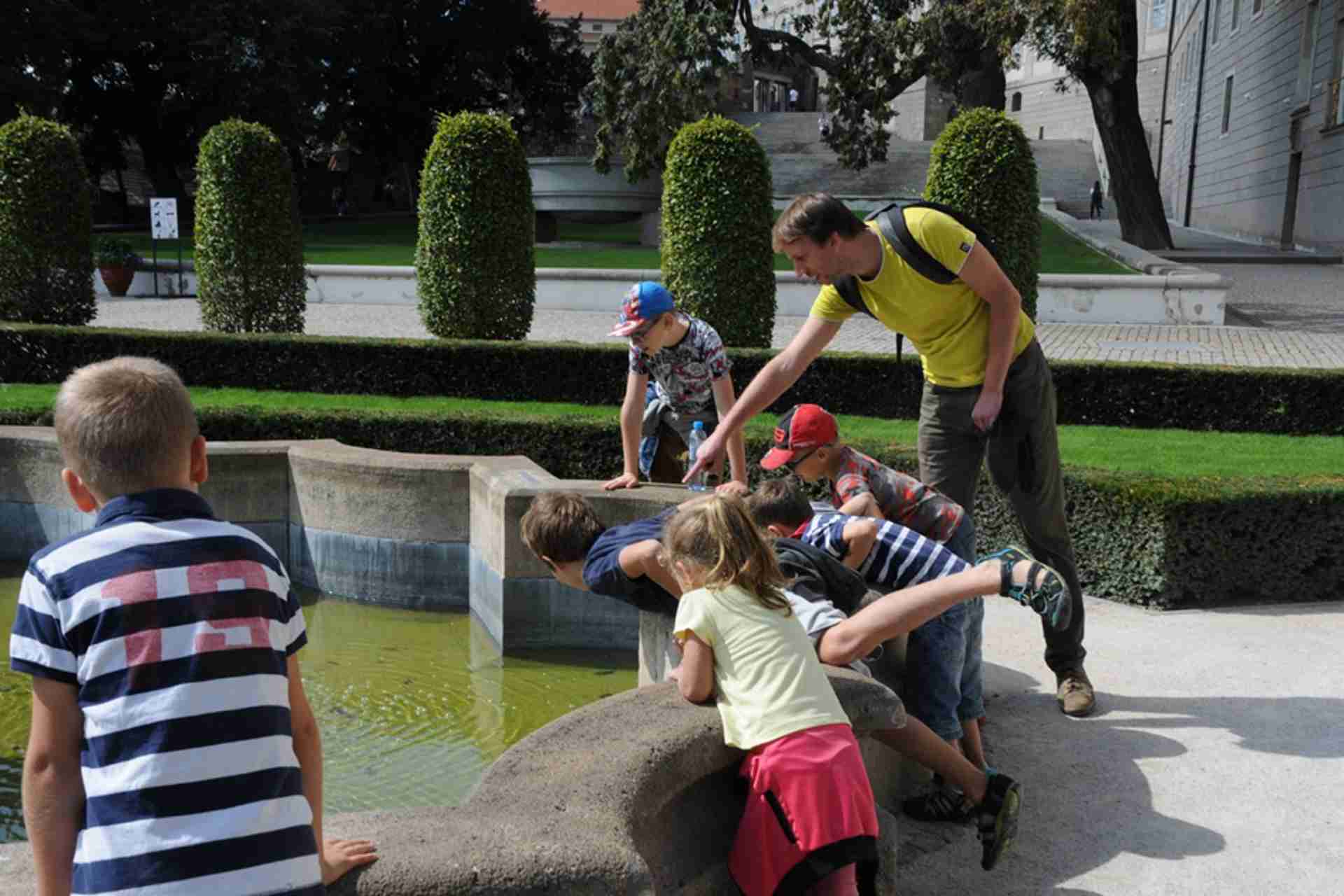 Every project has its goal – at the beginning Libor wanted to reach 5,555 Nepomuk’s sightings from Prague and all around the world. The number may have been subjective, but at the core was the connection between people sharing sightings with each other and uncovering the hidden world of Nepomuks around the world.

For Libor, the major challenge was finding the right way to share and showcase where he discovered Nepomuks and let other seekers help him. ‘I was creating a database of places where you can find the Saint,’ Libor explains, ‘but there was no map I could use to show where the places were. I was only presenting the statues to readers by saying, “There’s this statue, this painting or chapel.”’

Collaboration with Mapotic transformed the engagement: it wasn’t just about the photos anymore. There was a whole network of places, and even better, Nepomuks could pop up in Austria, Poland, Portugal – all over the world, as Libor and other interested people were able to share the map and start a conversation around it.
Some time ago, Libor started the map “Patrame po Pomukovi” (English: “We’re looking for Pomuk”) competition, whereby he invites people from within and outside of Prague and enthusiasts from around the world to also participate in the search for the famous Saint in their surroundings and while travelling.

The competition is part of the Peprna Praha philosophy. ‘I encourage children to look around, be curious and observant. Often, by finding a statue in the streets, you can understand how its story is related to the place.’ 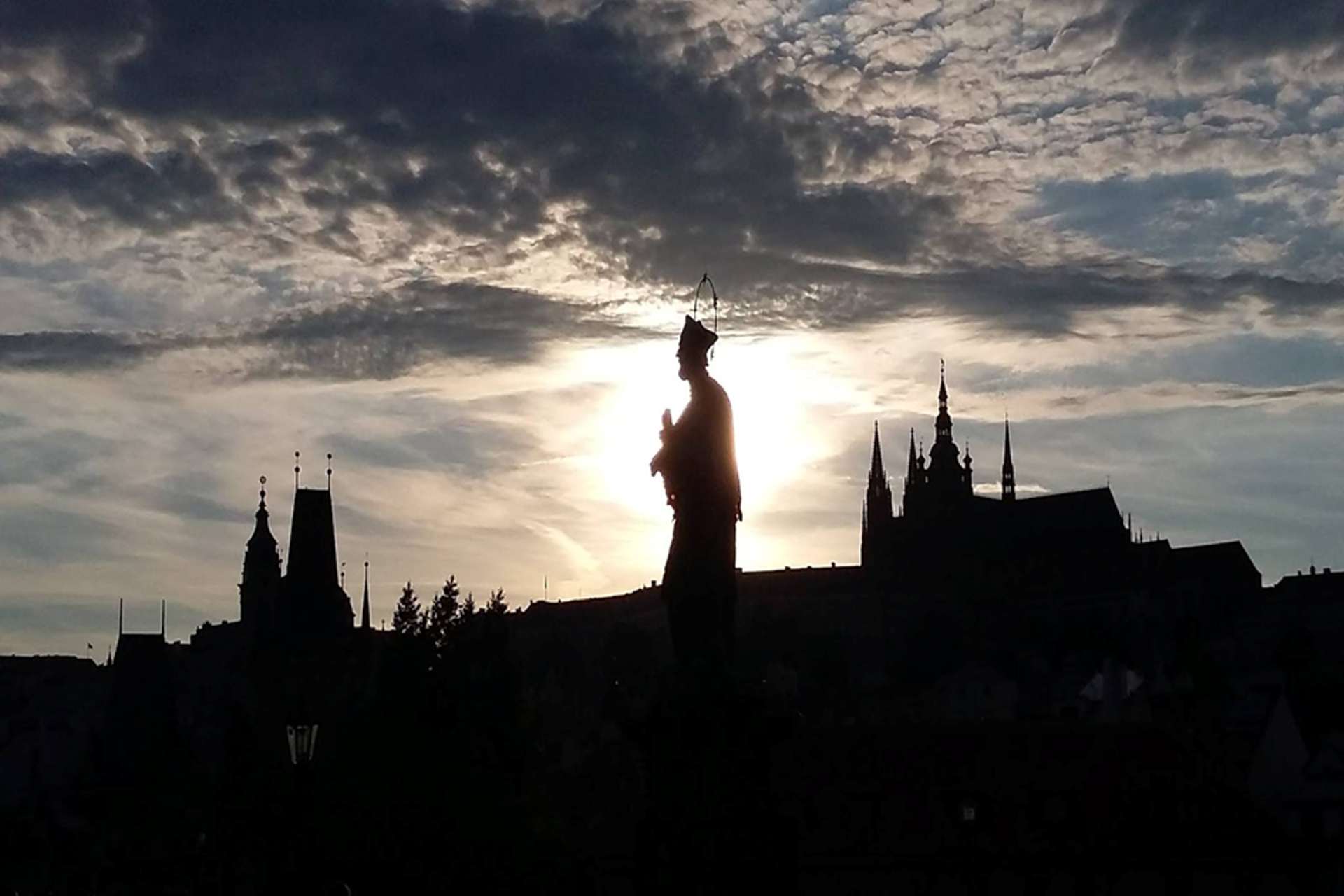 ‘Right now, it’s all about our growing map and the interaction with kids,’ Libor explains. ‘We really enjoy our time together and it’s great, because it’s culture-related. Through our walks and the maps, kids better understand the city they live in. I do it because I want the kids to build a relationship with the city, similar to the one I have.’ Libor hears many fun and joyful stories of discovery from children or their parents, who are happy their kids are engaged in this secret history of Nepomuk. One such typical story was around the typical five stars of the Saint, which are usually on statues in half circle over their head.

But sometimes these stars could cause a confusion. ‘On one walk we were in a square and I hear one small boy shouting “Mommy, mommy look, Nepomuk lived here too!” His mom asked how he figured that, while the boy replies, “There is five stars on this hotel!”’. Those kind of adorable stories is what keeps Libor on the track of sharing the knowledge of Nepomuks during these walks, and engaging kids and their parents in mapping through Mapotic.

Peprna Praha is now growing to cater to the increasing number of people who are interested in learning about the secrets of the city. ‘I once had four groups in one day. But I don’t want more than 12 kids in a group. We need space for questions. Plus there are parents so there are around 20 people most often,’ Libor explains.
‘When I’m abroad I talk to people, show them our Mapotic map and invite them to add places. When anyone is abroad they can work on the map too, which is great. Kids are the most enthusiastic, though. They take it as a game. My son calls me all the time when he finds Nepomuk during the scout trips. My main challenge now is to connect to more people and get closer to the community. I’m also preparing an interview for a magazine, to spread the word about “We’re looking for Pomuk” project.’

At heart, for Libor and the fans of Peprna Praha, it’s all about fun. ‘It’s similar to Pokémon go,’ says Libor, jokingly. ‘You hunt Saint Nepomuk, take a picture when you find him and upload it. Everywhere – in towns, villages, abroad. This brings joy to kids and the feeling of discovery. And parents are happy to see that kids can learn something about our Saint while playing. They don’t look for some unreal figures from an imaginary world.’

As people add places from all over Europe, and actually from all over the world, interest in the region’s rich history is set to grow. ‘Moreover, it helps strengthen the connection to the place where you live. And that never hurts,’ Libor concludes. 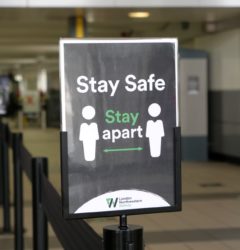 Creating a virtual twin of a railway based on tracking data